Understanding the Impact of Balloon Releases: Sustainable Alternatives to Balloons

When I graduated college, I remember one of the most anticipated parts of the ceremony was walking across the lawn. The tradition was for each graduate to carry as many balloons as possible to help their family identify them in the crowd. The larger and more unique your balloon bouquet, the more likely your family could spot you in the crowd of thousands of enthusiastic graduates.

The morning of my graduation, my parents left their hotel room to pick up my bouquet and meet me at my apartment. We planned to take pictures and meet at the ceremony. I told my mom to “surprise me” with her balloon choices, although I did request a Hello Kitty balloon because who doesn’t love a cat in pink polka dots!

When my parents arrived at my apartment that morning, there were no balloons. It turns out, as my parents were walking out of the car and making the hike up the mountainous grounds of Charlottesville, they accidently let the balloons go.  I was devastated! For one, I wouldn’t be able to cross the lawn with balloons like the rest of my peers. Secondly, as an Environmental Science major, I was aware that released balloons were not great for the environment.

Ironically, as I began my internship after college graduation, I attended a seminar where I learned exactly how bad balloons were for the environment.

What Goes Up Must Come Down

Did you know that millions of balloons are released in the United States each year? Once released, balloons travel into the air until they pop and fall back down. Most commonly, these balloons fall along coastlines, beaches, and into waterways. 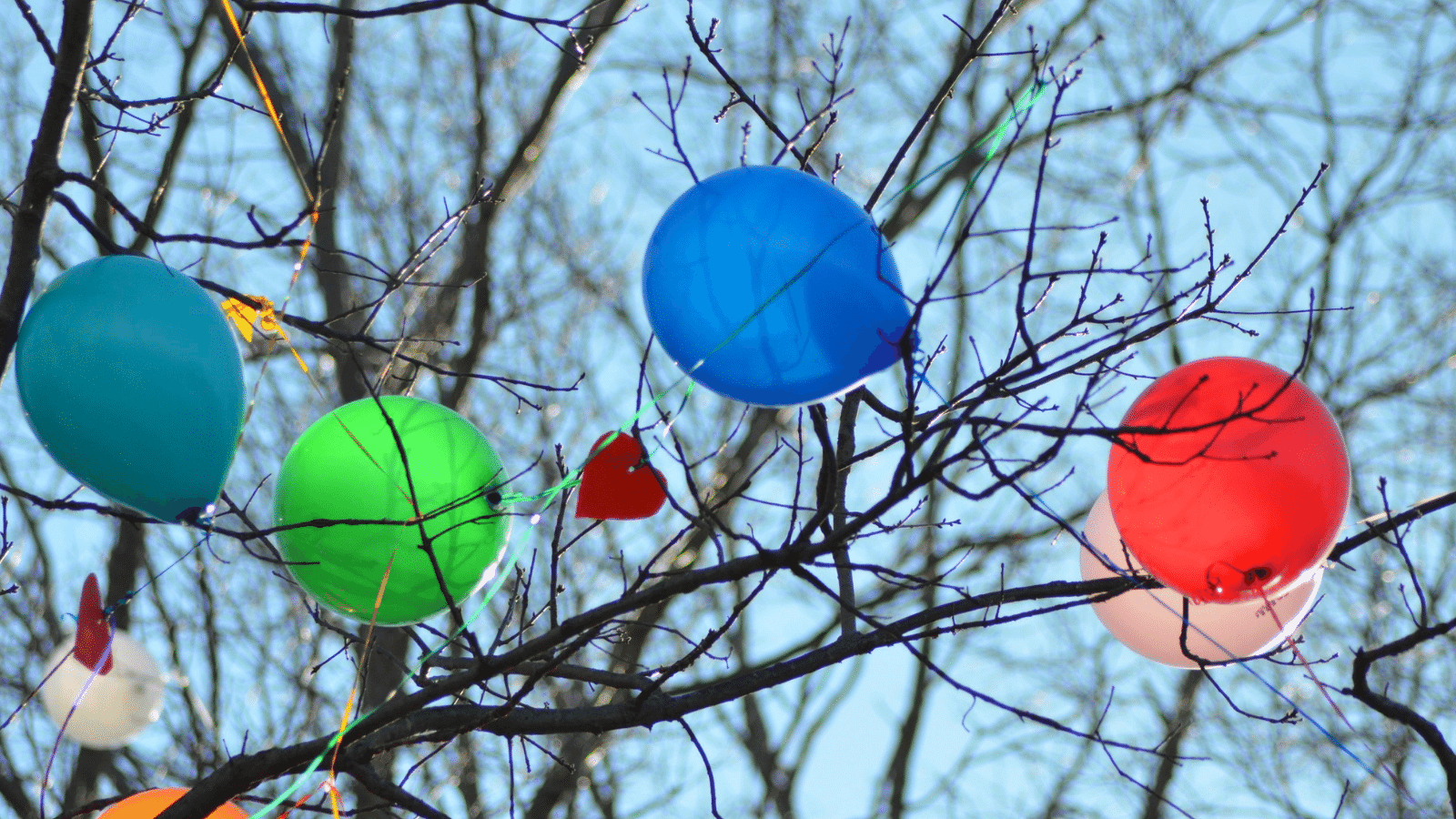 According to an International Coastal Cleanup 2019 Report by Longwood University, over a period of five years, volunteers have reported cleaning up 4,916 pieces of balloon litter, with over half of those pieces being found on beaches (Longwood University Marine Litter Report). This has a significant environmental impact on coastal areas and marine life.

The Problem With Balloons

Balloons contribute to our plastic pollution problem. Although balloons only take moments to release, they could take hundreds of years to biodegrade. Over time, these balloon pieces get smaller and smaller and eventually turn into microplastics.

Balloons also harm marine life because they’re often ingested by animals. Animals mistake balloons for food and fill their bellies with the polluted pieces. Believing they’re full, they risk starvation because they haven’t eaten anything of nutritional value. In addition, balloons risk intestinal obstruction once ingested.

Animals can also become entangled in the balloon debris. The ribbon and strings hanging from balloons get wrapped around animals preventing them from normal foraging activities (Wageningen University).

Balloon Release LawIn 2021, a new law was passed making balloon releases illegal in Virginia. According to § 29.1-556.1. in the Code of Virginia, any individual age 16 years of age or older is liable for a civil penalty of $25 per balloon released if convicted of a violation.

Remember, if you are going to use balloons at a party or big event, hold on tight and don’t let them go!